Climate Change: Extreme Weather Condition
The occurrence of climate change in Southeast Asia, one of the world’s fastest-growing regions that have been stimulated by the heavy exploitation of natural resources, deforestation, forest burning, and encroachment resulting in the increase and aggravation of problems in Climate Change threats.

Thailand and nearby countries are now facing extreme and unusual weather conditions. The change in weather patterns has become an immediate crisis, creating a larger impact on livelihoods, reduction of food security, agricultural productivity, and health risks.

Average temperatures in Southeast Asia have risen every decade since 1960, becoming the world's most affected region by climate change in the past 20 years, according to the Global Climate Risk Index-Germanwatch. This increase has resulted in unusual phenomenons ranging from extreme drought, heatwaves, unusual flooding, and cold spells. The future temperatures are expected to continue changing unpredictably. 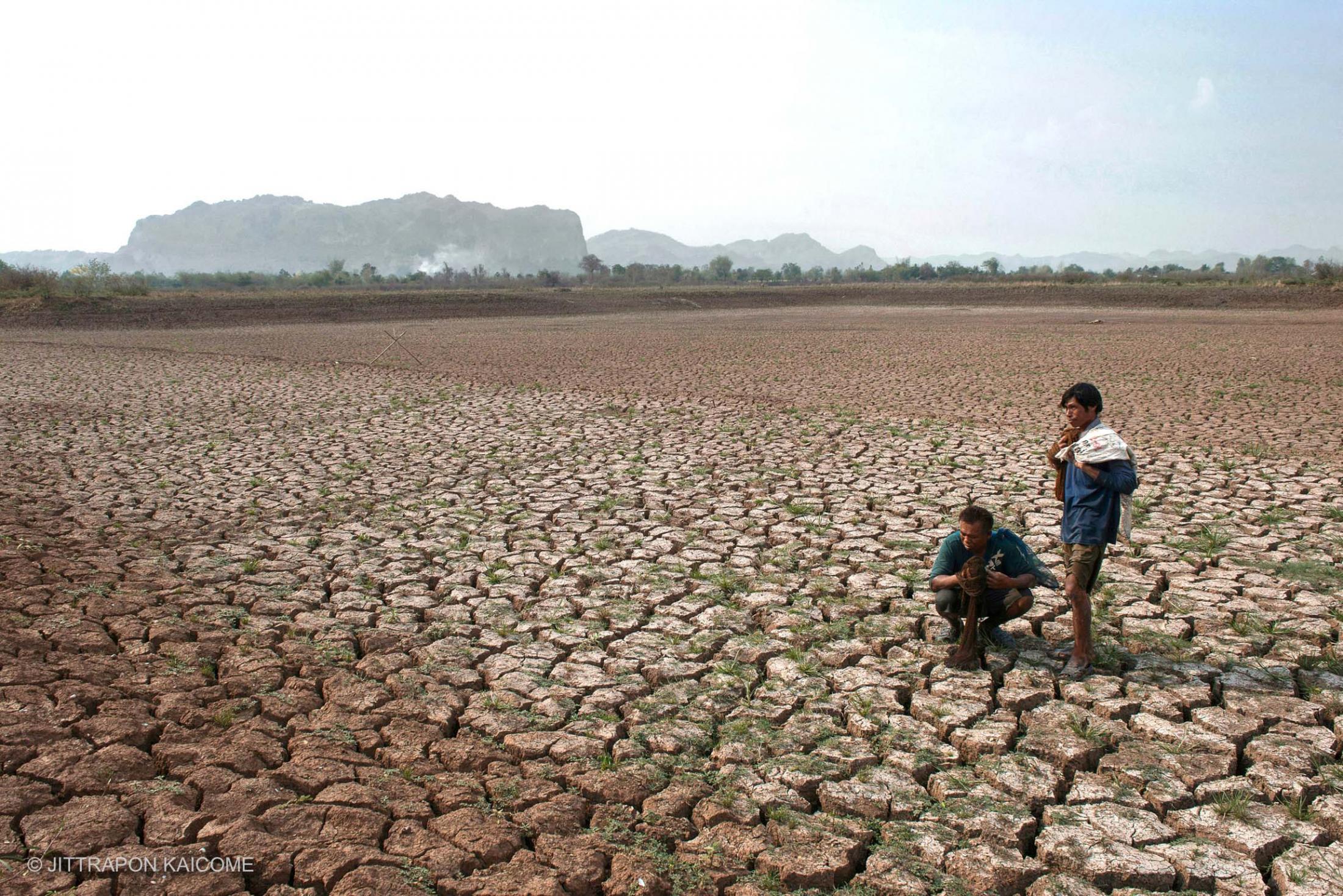 Thailand faced the heaviest drought in decades with an extended dry season and temperatures rocketing above 40 degrees Celsius. The late arrival of annual rains and the deficient precipitation resulted in insufficiency of water for domestic and agricultural uses. In Phu Pha Man, Khon Kean province, a water diversion for agricultural land has turned into an empty cracked basin for the first time in its existence. April 4, 2016. 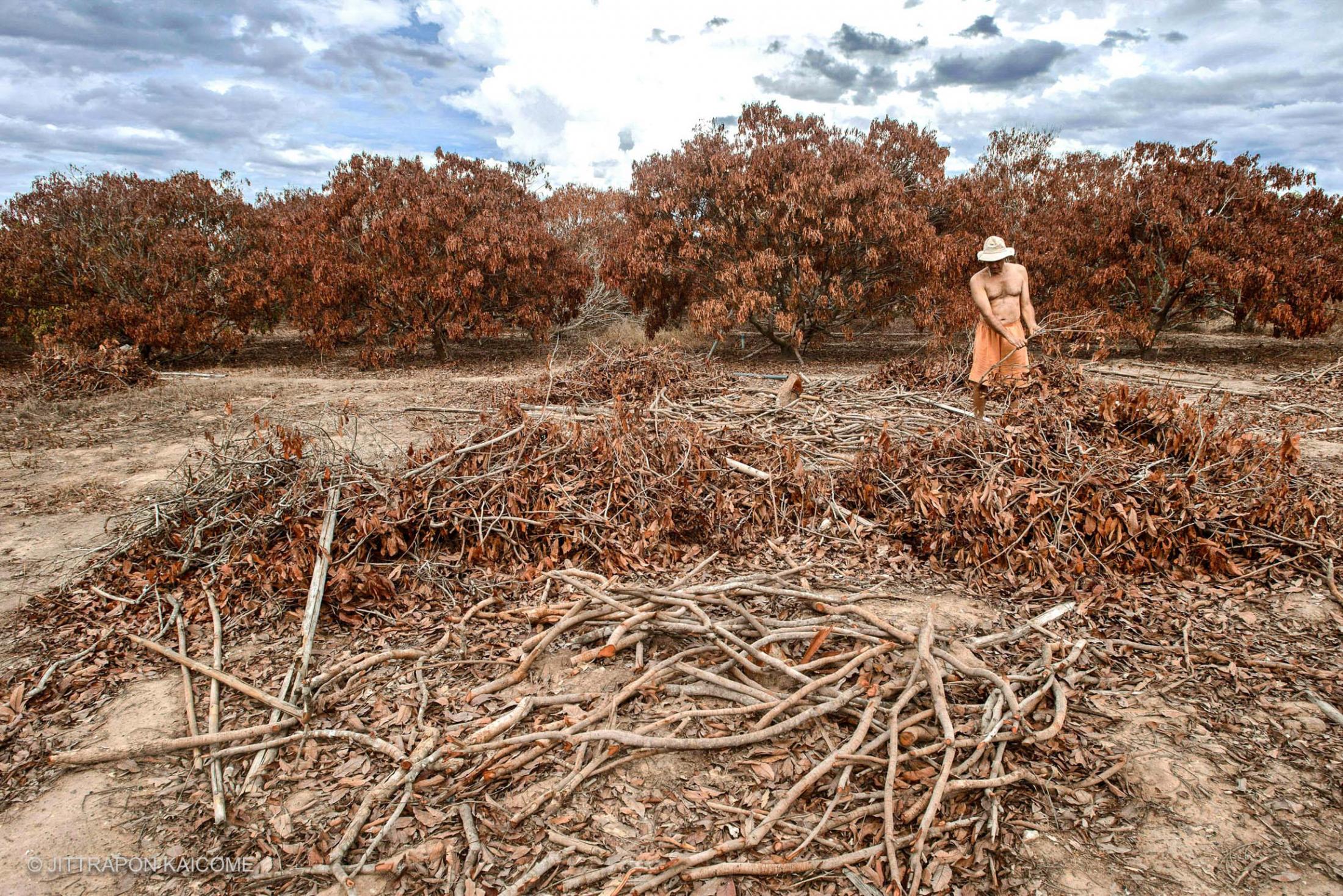 A dramatic turn in the climate that griped the country during this period ruined farms and farm production. Heavy drought causes a heat wave that eventually destroys plants. Longan, a tropical fruit tree that normally makes important incomes for local farmers. The only thing the owner of this Longan garden can do is to watch the plants die in front of him. May 20, 2017-Doi Lo, Chiang Mai, Thailand. 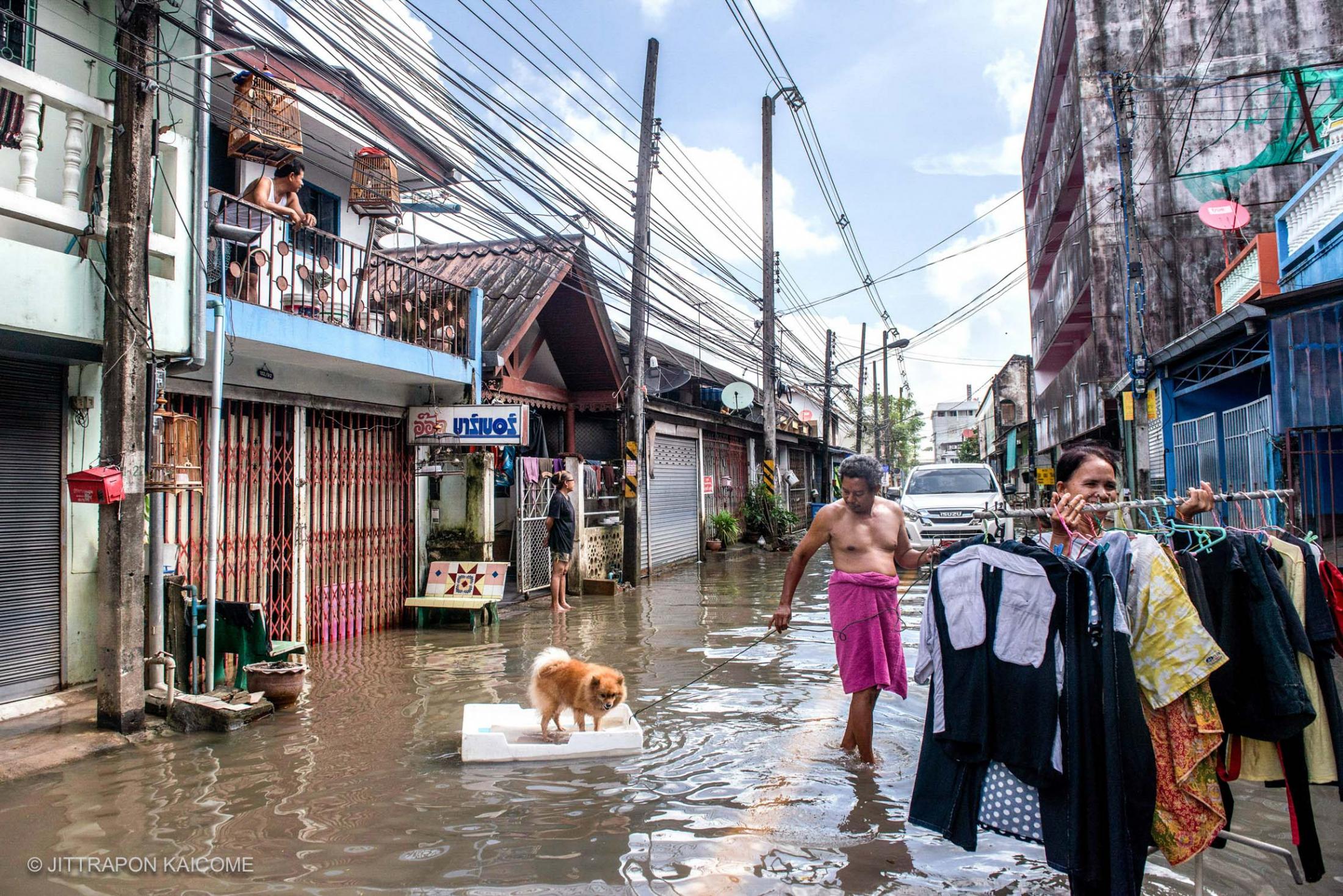 Civilians are clearing up the mess and begin surveying damage from flash flooding resulting from unseasonal, heavy rains three times in one month. Nakhon Ratchasima, Thailand-January 22, 2017. 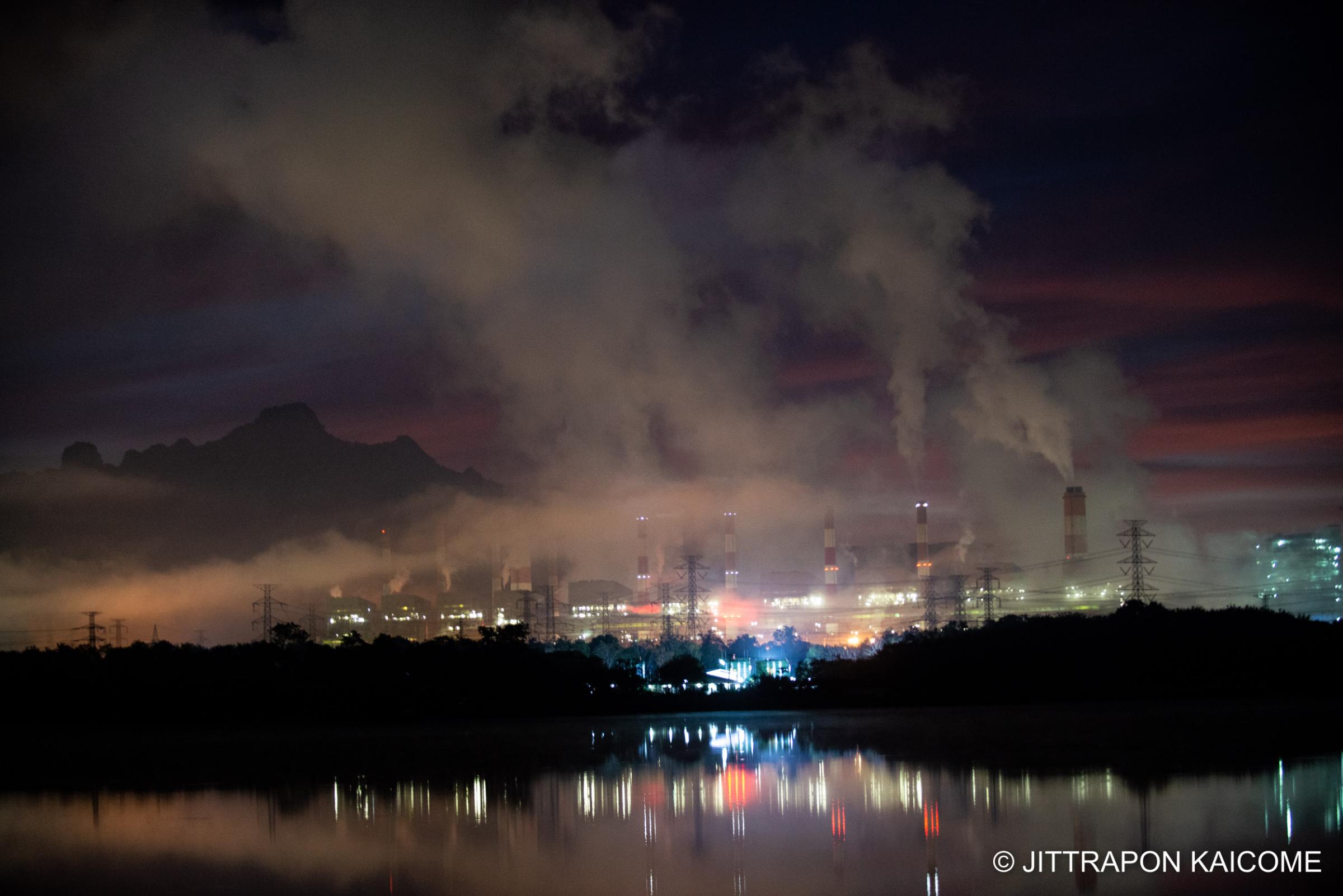 Mae Moh power plant is the largest coal-fired power plant in Thailand. Each year the power plant utilizes over 17 million tons of lignite coal from Mae Moh mine, an open-case mining located in the same area. Both the power plant and the coal mine produce pollutants that can affect the environment and human health. Northern Thailand, November 23, 2017. (Info by: Health Systems Research Institute (HSRI) 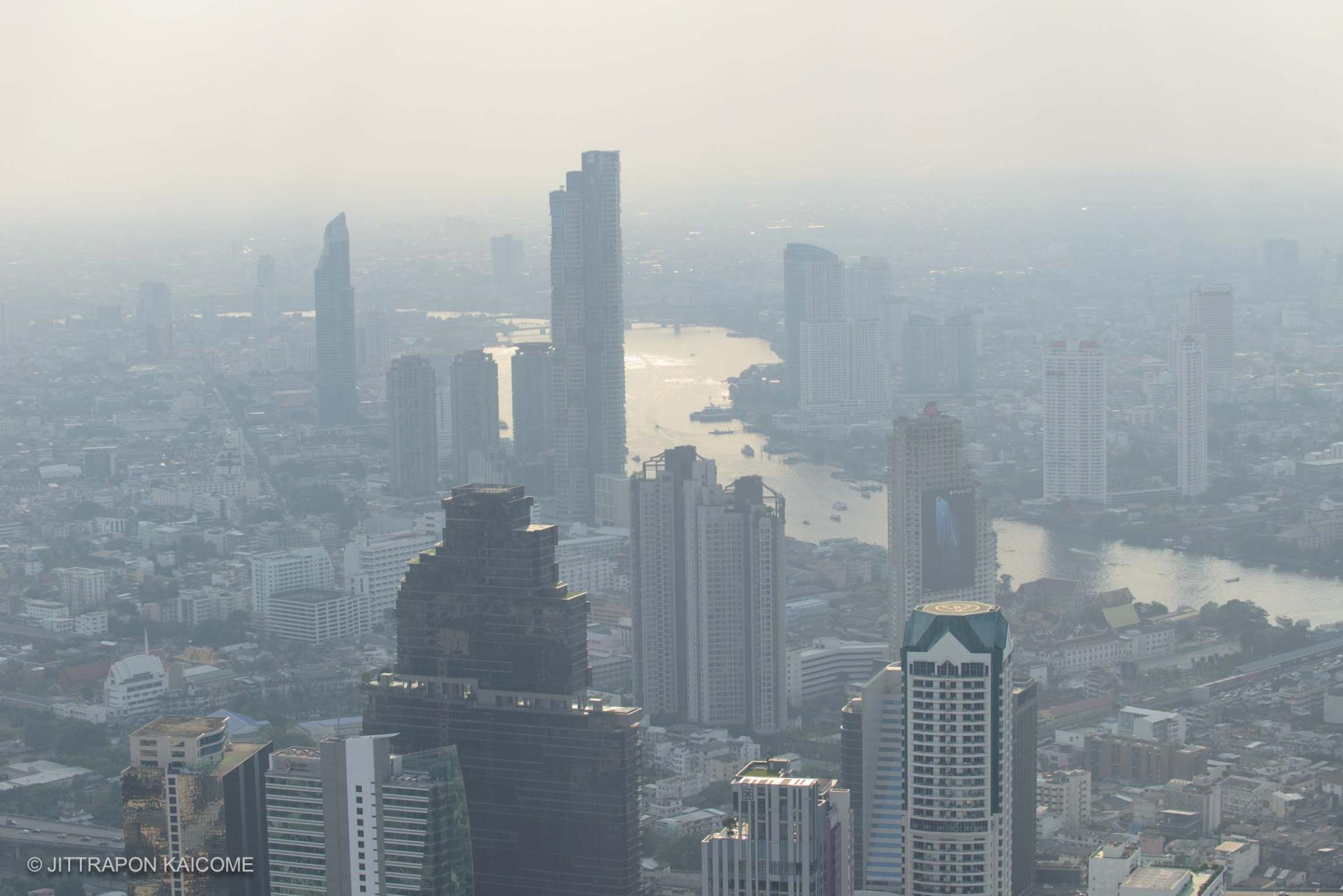 Bangkok is facing air pollution covering the entire city resulted from a temperature inversion that has never occurred, a new normal resulted from global warming. Thailand on January 17, 2019. 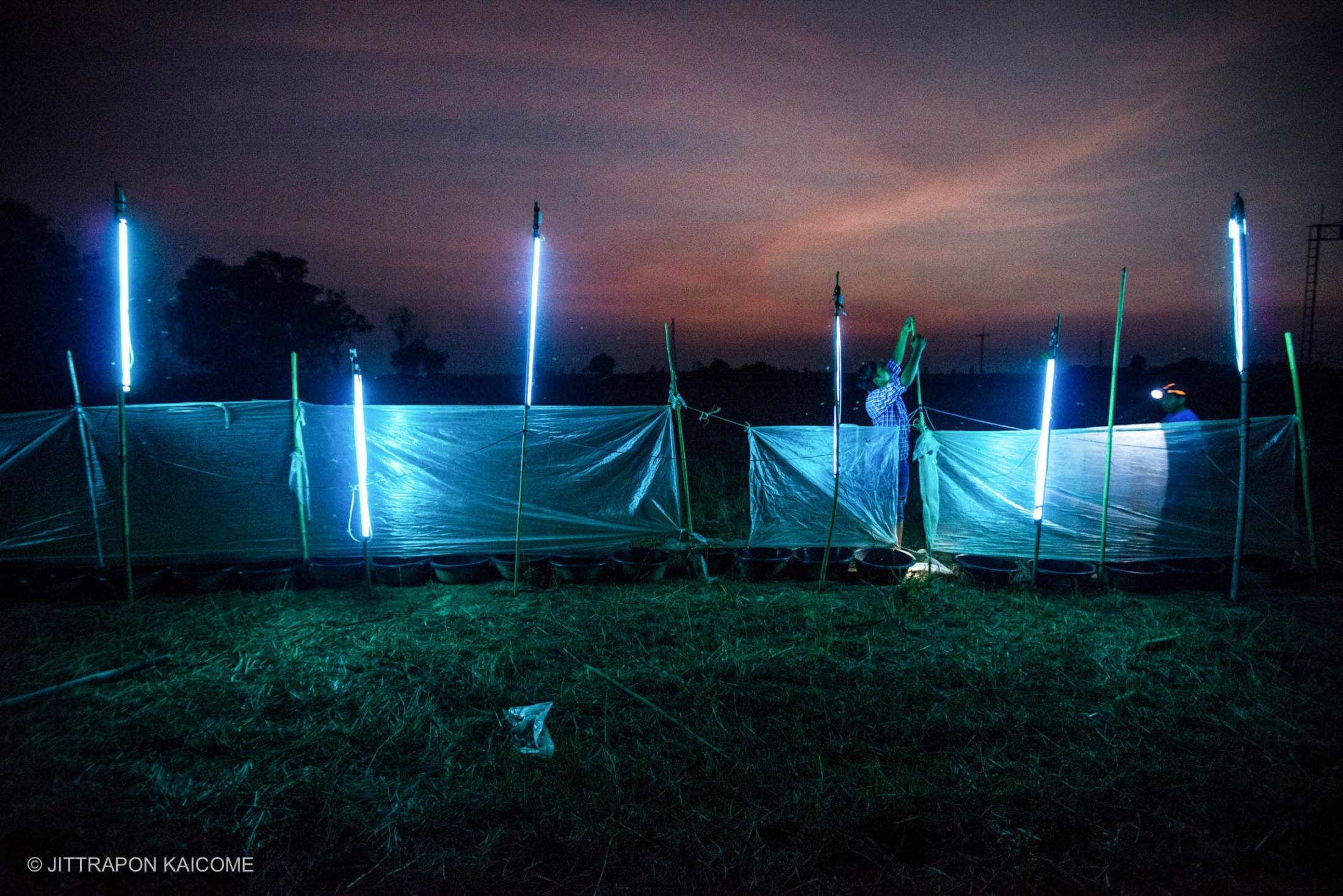 Civilian in Kaset Wisai, Roi Et, Thailand is setting up neon lights to trap bugs which is an alternative way to make a living, replacing agriculture in periods of heavy drought. May 5, 2016. 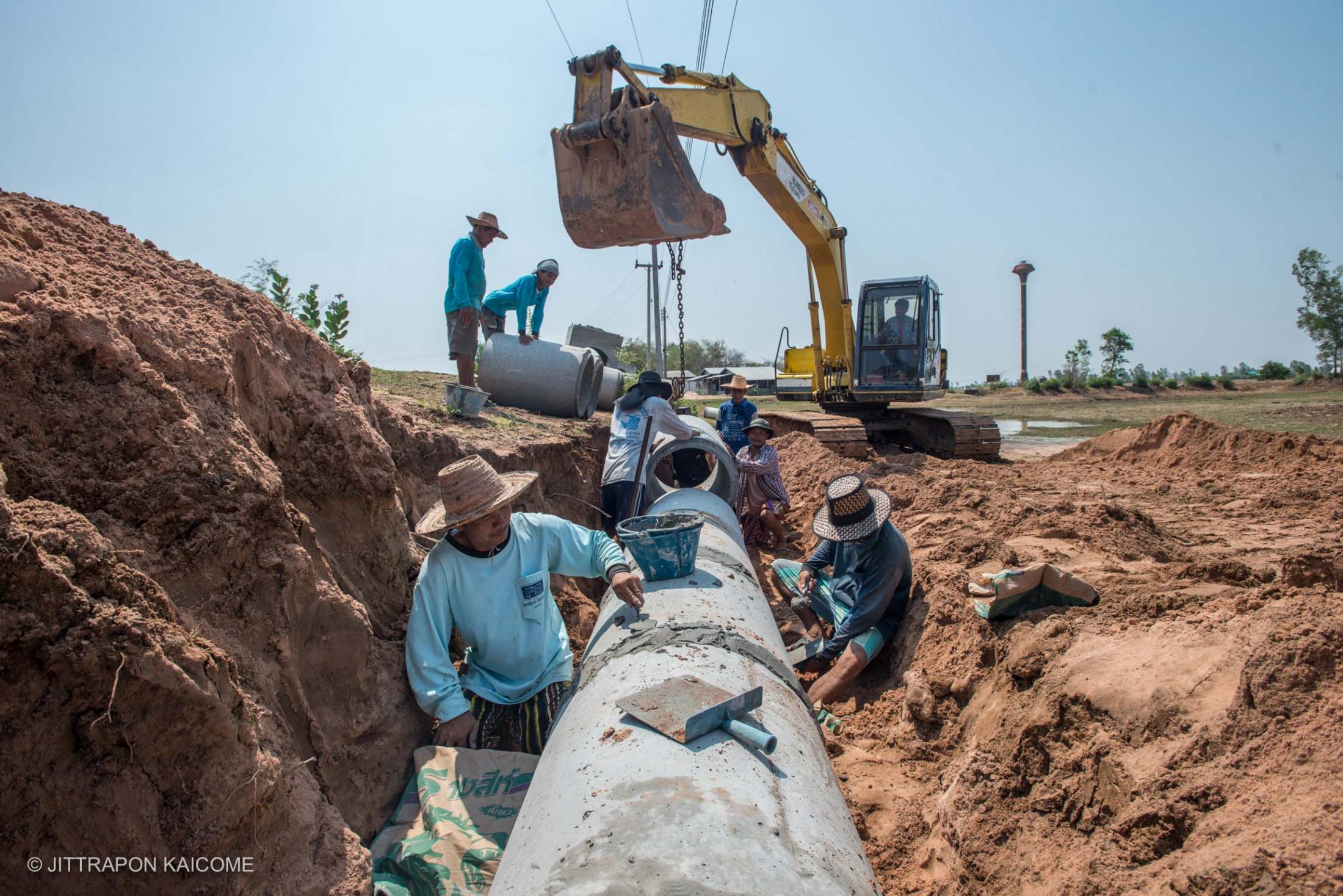 In Roi-Ed province is facing extreme drought causing a lack of water usage in farming and a daily basis. Civilians are trying to build a water supply pipe to connect with the other villages nearby. Thailand on May 06, 2016. 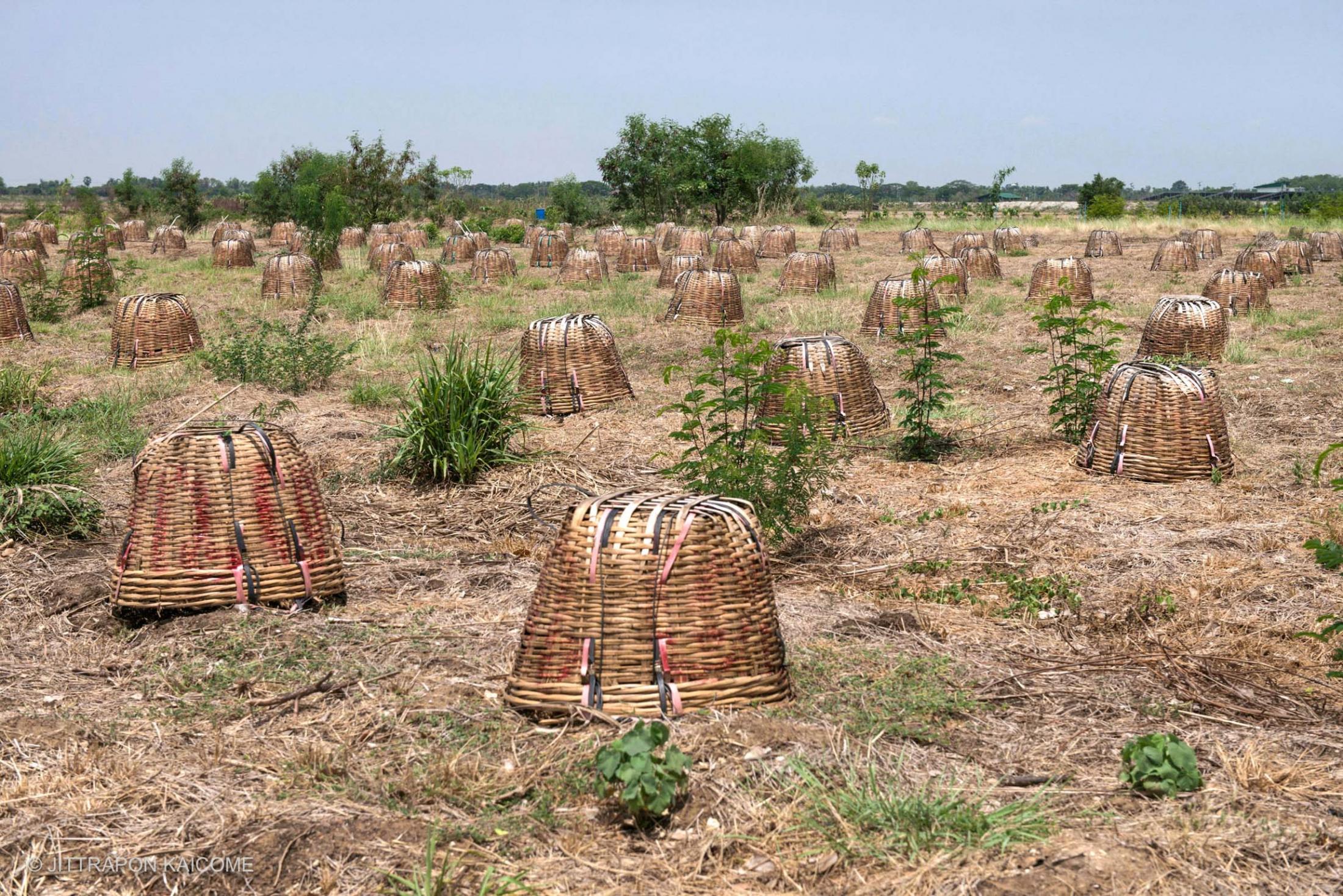 Ang Thong, Thailand. farmers use baskets to cover the Melientha suavis from strong direct sunlight during a period of heavy drought. Normally, the price of this vegetable is relatively high and brings a lucrative income to farmers. May 14, 2016. 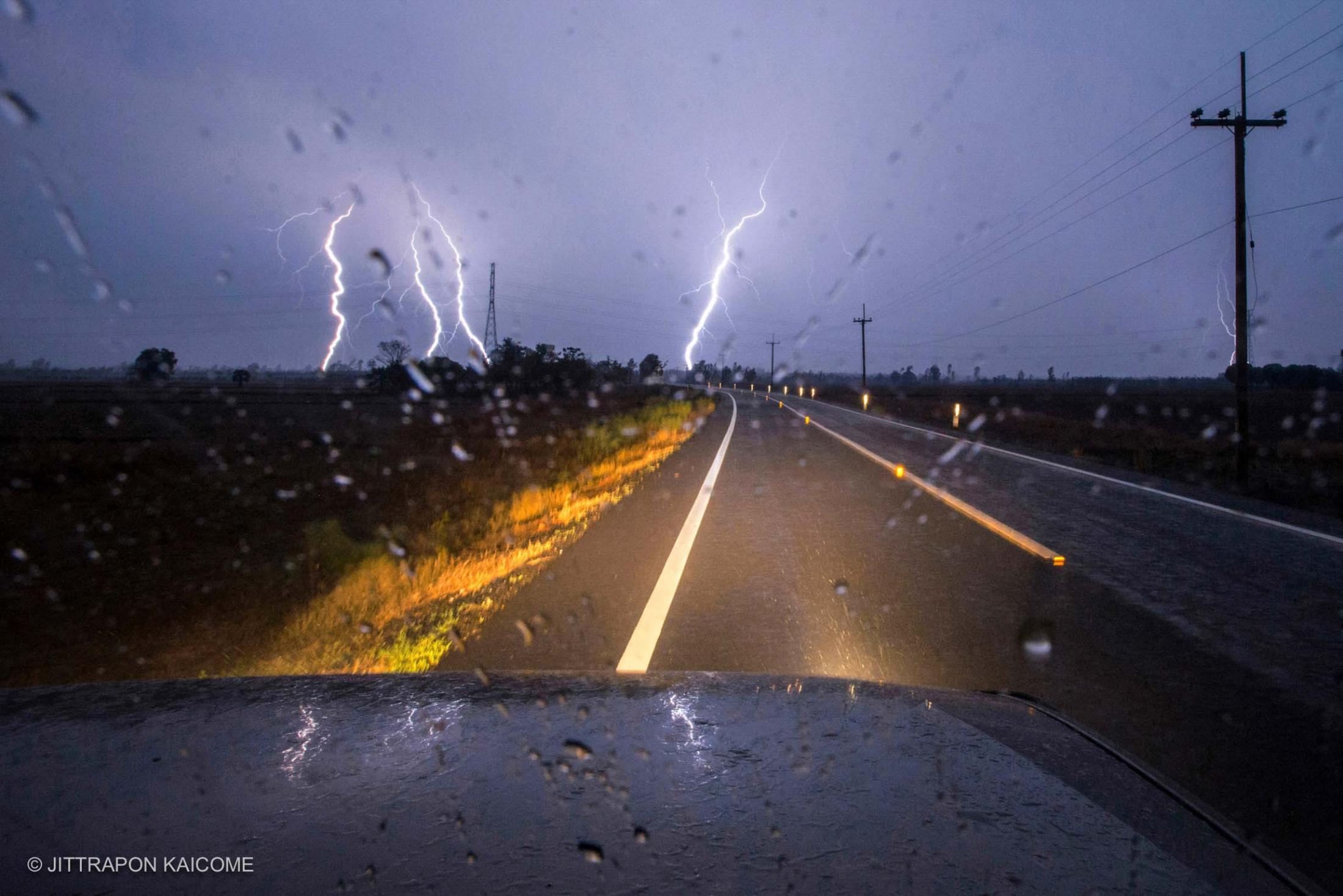 During a change of season, the extended periods of heavy drought conditions accompanied by heavy hail storms and lighting strike in many areas in Thailand. 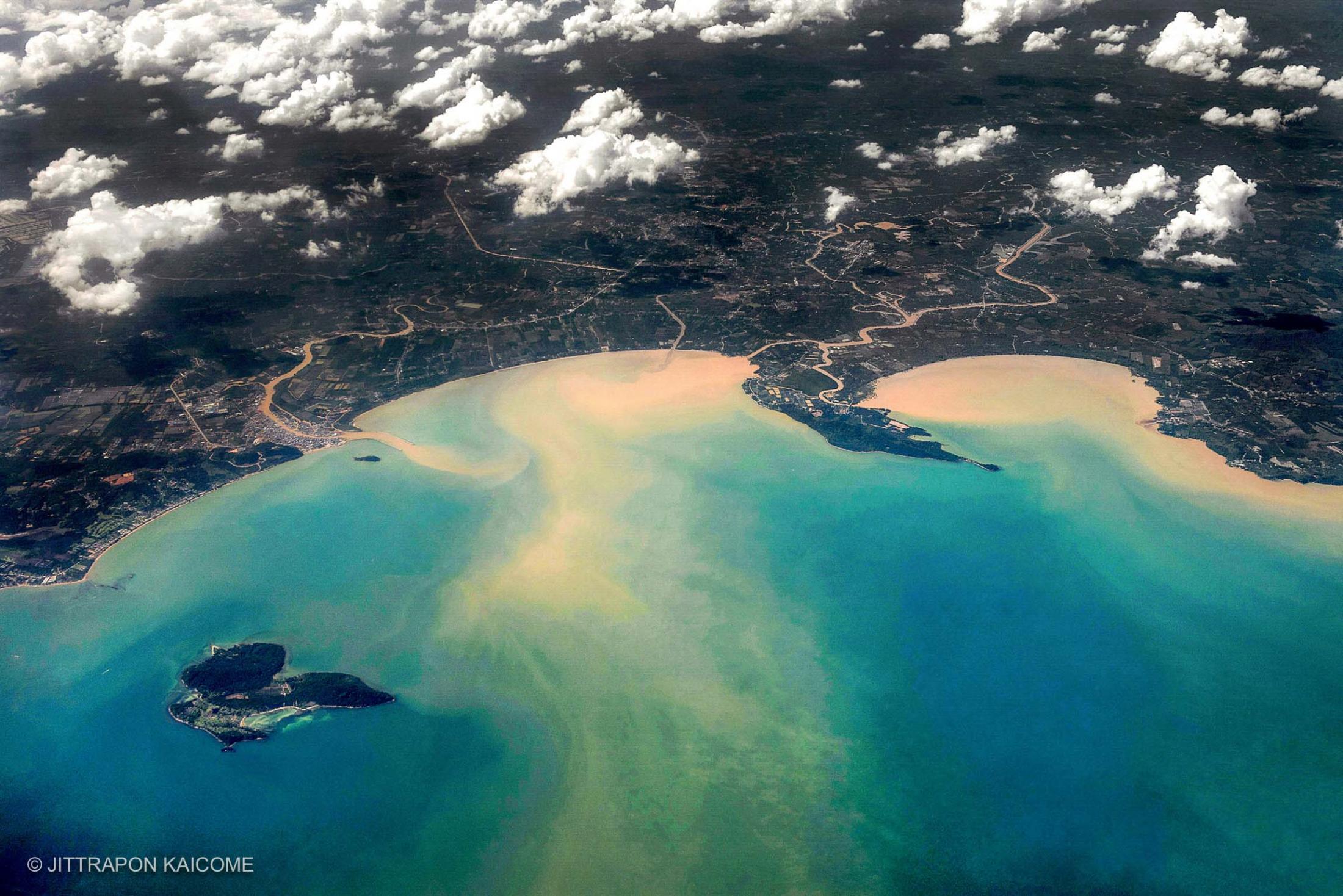 1.9 millions of people in the 11 southern provinces of Thailand were suffering from flash flood resulted from huge amounts of the off-season rainfall. Surat Thani, Chumphon and some adjacent provinces located at the end of the confluence of many rivers. The rise in sea level can cause extreme flooding over the long period in these areas especially after normal high tide coincides with storm surge. Many thousands of lives have been waiting for the water to drain out soon. January 13, 2017. 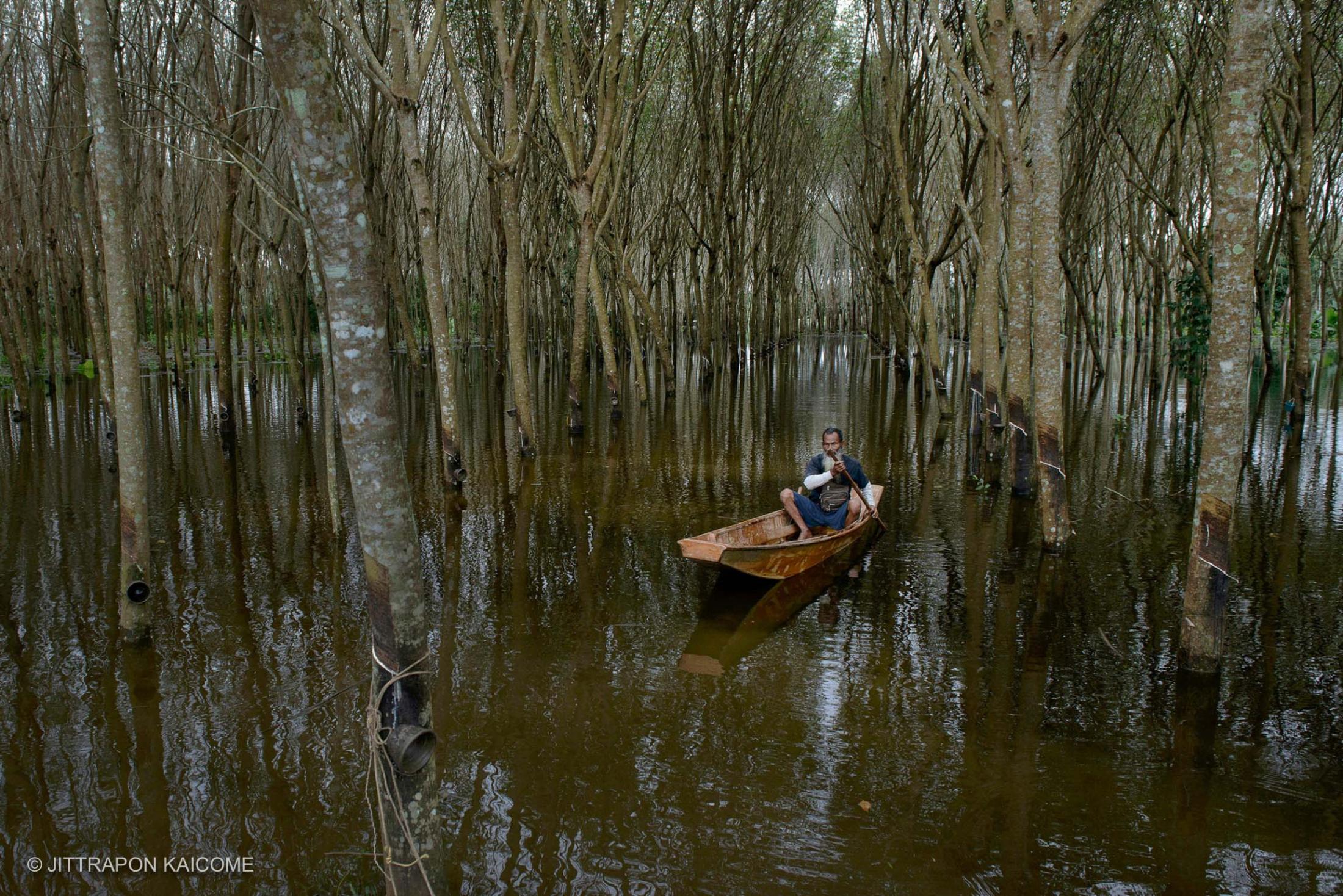 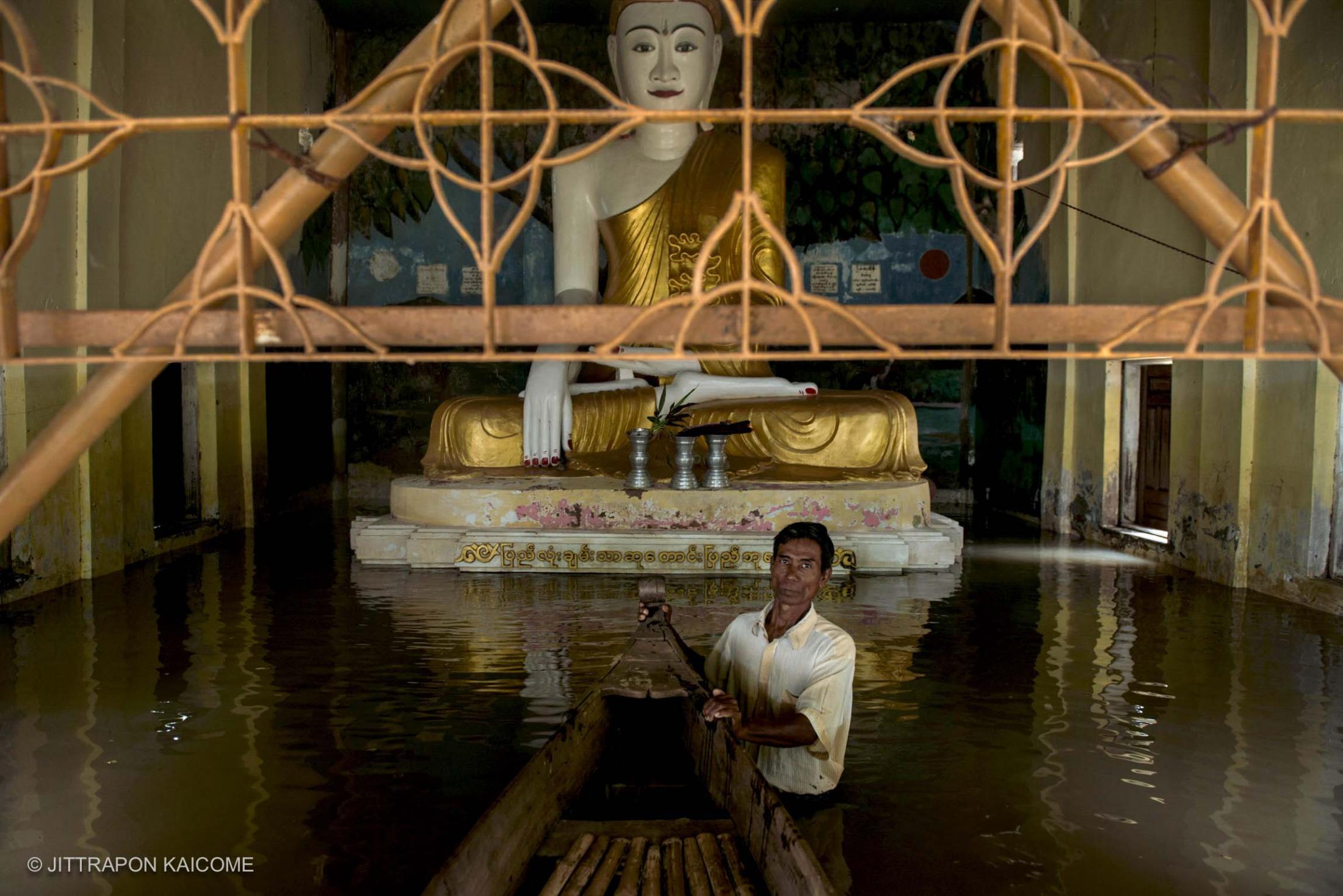 Myanmar is facing a long severe flooding, flash flood flows over the upper part of the Ayeyarwady with an increase in the height of waves in the sea resulted in large flood in many provinces in the South. High tide flooding in Mawbi county, a villager paddling his boat inside the temple where it has been flooded for many weeks. Flood victims are living amid high water level likely to be encountered with heavy rainfall throughout the rest of rainy season. August 20, 2016. 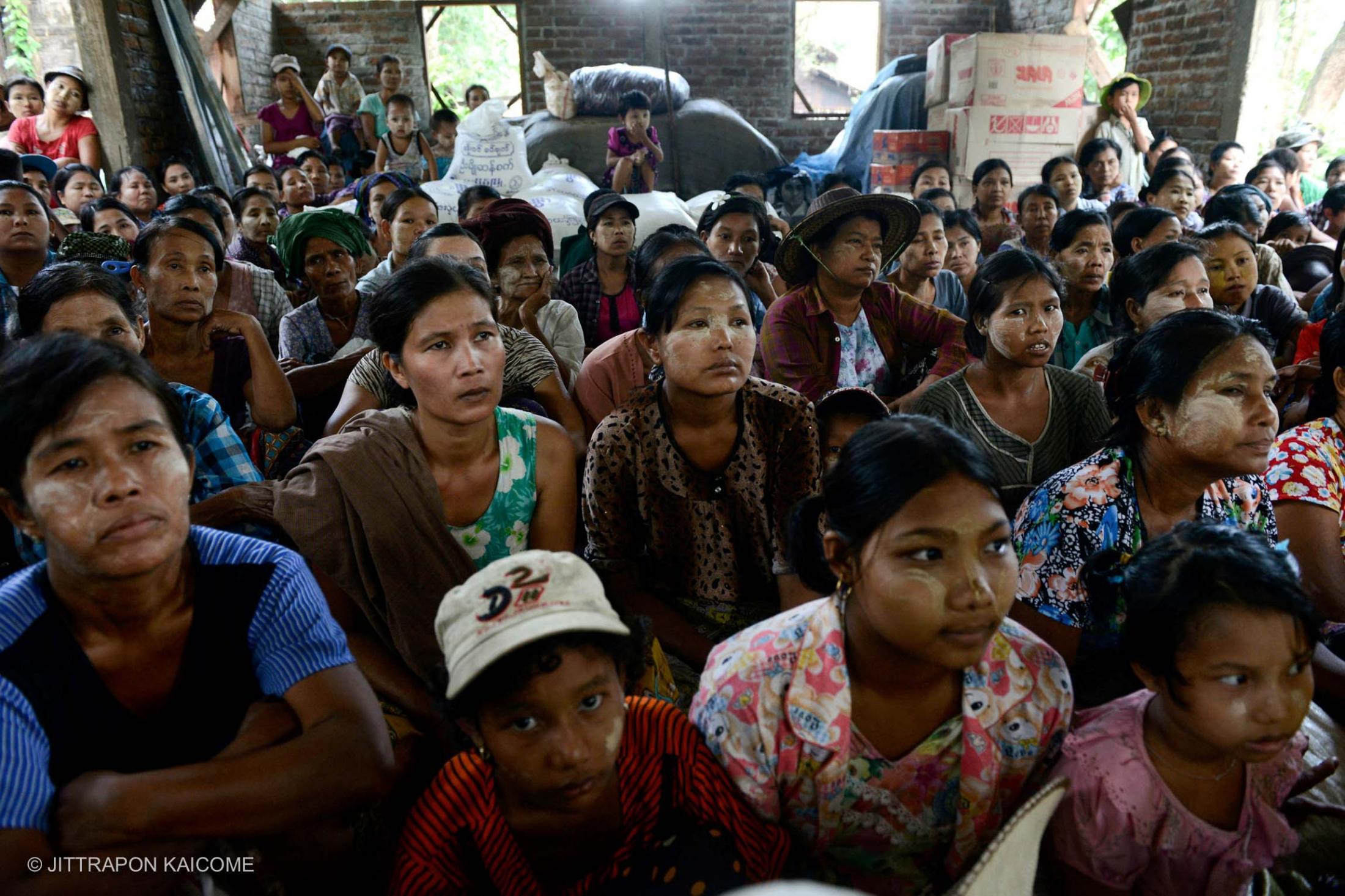 Flooding has a great impact on farmers’ main income since farm land and arable areas have been flooded. Homes and household assets has been destroyed once they are completely underwater. Farm crops have also been spoiled and are unable to consumed resulting in food and water shortage. In Shan Queen village, Myanmar flood victims in the queue waiting for supports from the government and Non Government Organisations. August 22, 2016. 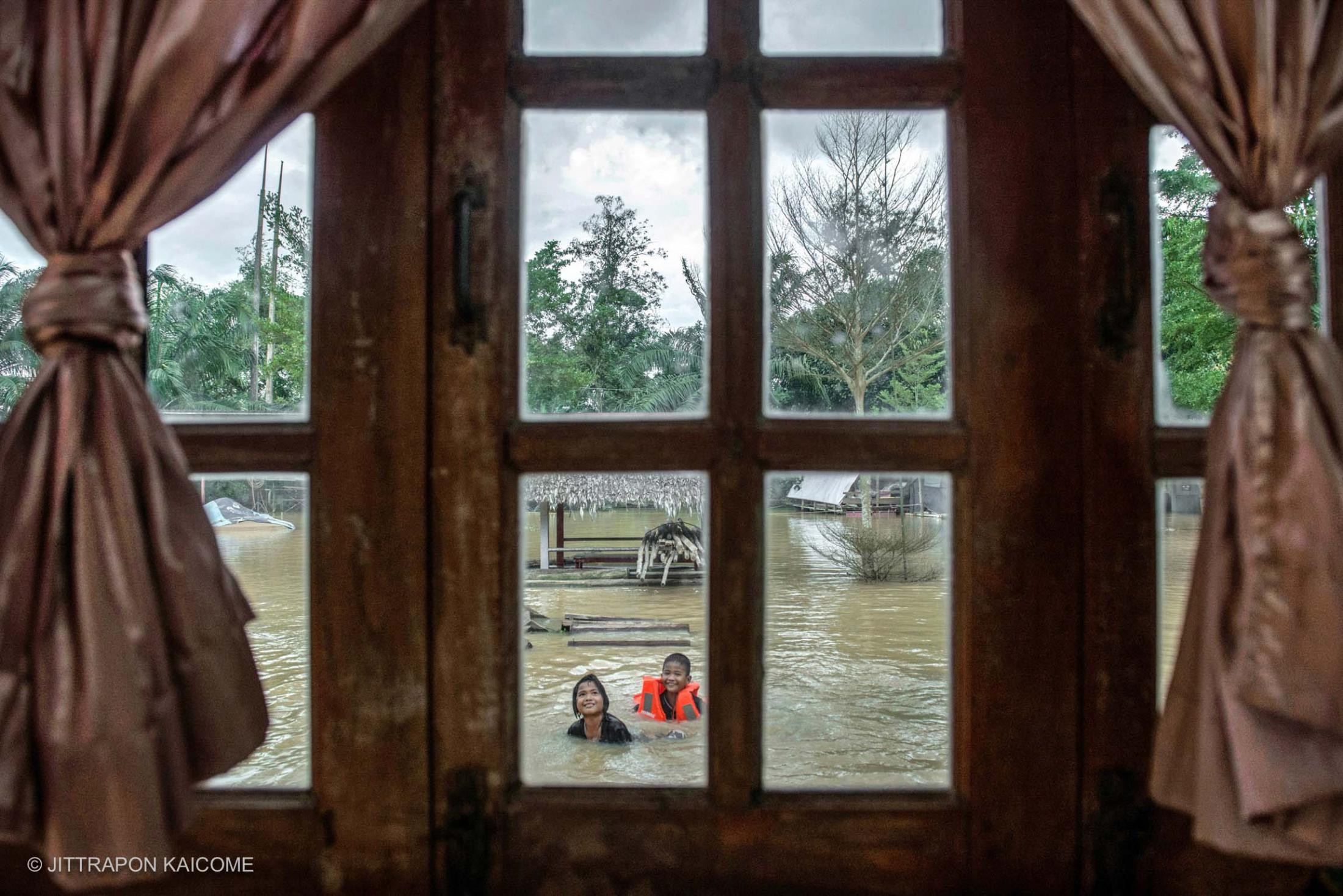 Southern Thailand is hit by Unusual flooding resulted in unseasonal rainfall more than 3 times in January, Civilians in Surat Thani is living with high rise flooding for many weeks. January 18, 2017. 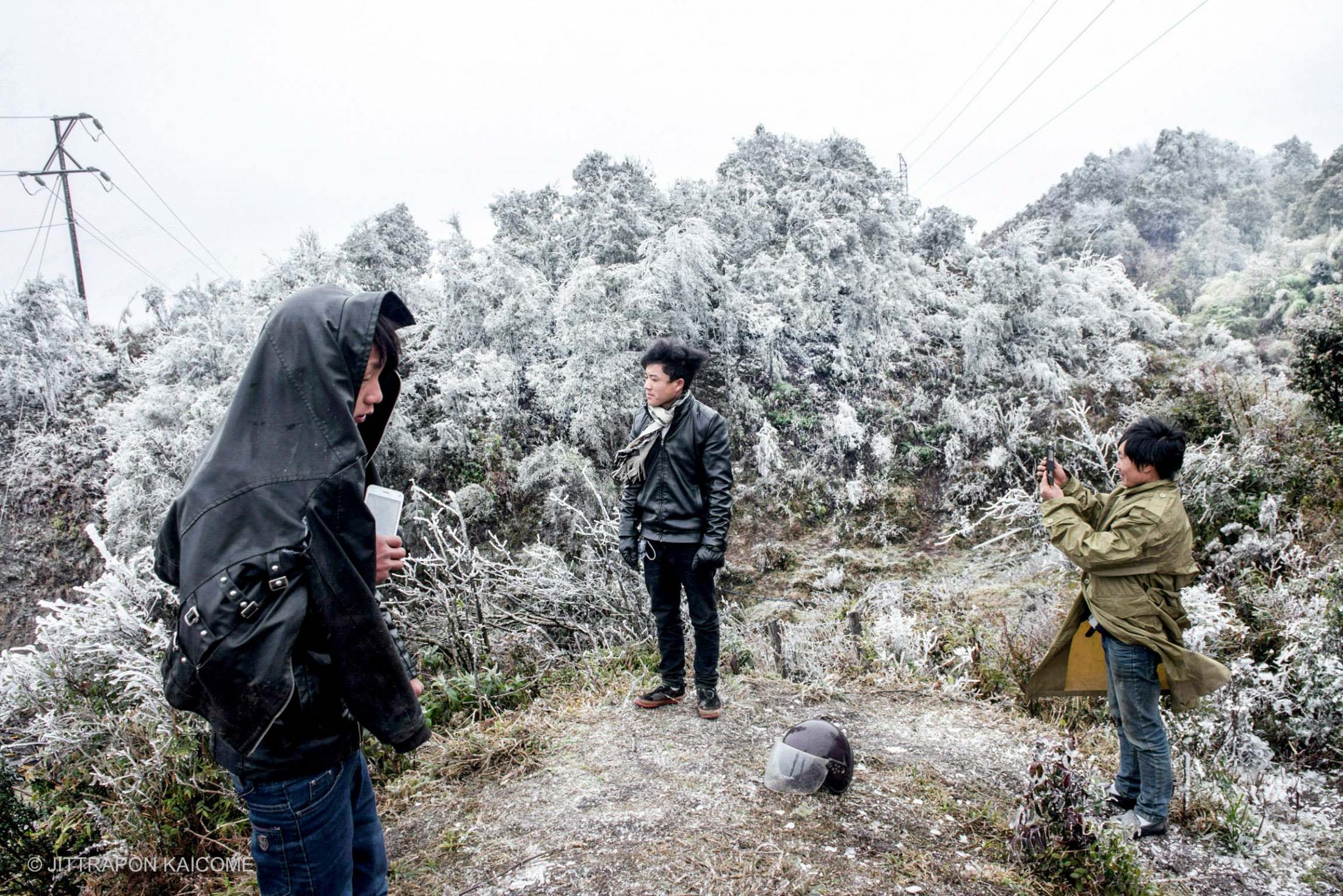 Northern Vietnam is experiencing the unusual cold wave that resulted in frost and snow on top of mountains. Local and foreign visitors are excited to come making traffic jams on mountain roads - Vietnam on February 05, 2018.